Where To See Gorillas in Africa, Best Gorilla Watching Holidays

10 Best Places to See gorillas in Africa, How To See Gorillas In the Wild

Many of the people who think of gorilla trekking mostly think of Uganda and Rwanda, however, there are many different places where these endangered mountain gorillas can be trekked. Below are some of the 10 famous places for gorilla trekking in Africa.

Uganda makes it on top of destinations in Africa where you can see the gorillas.  You visit Bwindi Forest National Park for the ultimate mountain gorilla trekking. A gorilla permit costs $ 700 per person per trek (1 hour with the mountain gorillas.)

The other park for gorilla tours in Uganda is Mgahinga national park is also part of the tri national Virunga conservation Area and the habituated gorillas usually cross into DRC.Also hiking to the top of Mt sabinyo where Rwanda, Uganda and DRC meet.

This is also an exceptional way of seeing the mountain gorillas in their kingdom and it’s an island of forest that is enclosed by the sea of the densely populated farmland.

In the North where the roads wind, you will view Bwindi impenetrable Forest National park full of bio diversity at a lower altitude. This has got 4 gorilla groups that are well habituated for tourism and there are two more that are habituated to handle the demand. Insight Safari holidays offers the most realistic packages to visit the gorillas in Uganda.

Some of the taxonomists refer to Bwindi gorillas as a separate sub species of the eastern gorilla and the lack of hair on their brow can easily differentiate them from their shaggier Virunga cousins.

Uganda has also got many other activities that can be combined with gorilla trekking and these include; hiking of the Rwenzori, white water rafting on the source of the Nile, chimpanzee trekking and many more Uganda safaris.

A gorilla permit in Rwanda costs $1500. Gorilla trekking in Volcanoes National Park is the most luxurious safari in Africa. Rwanda is a size of the wales, with good main roads and it’s well developed with the sub structure.

It’s also known that it’s the work of Dian Fossey that fictionalized in the film gorillas in the mist, and this has made Rwanda’s volcanoes National park people’s choice for mountain gorilla trekking. There are the relaxed gorillas and the open habitat, montane vegetation with the stunning views that improve the many chances of good gorilla watching experience. 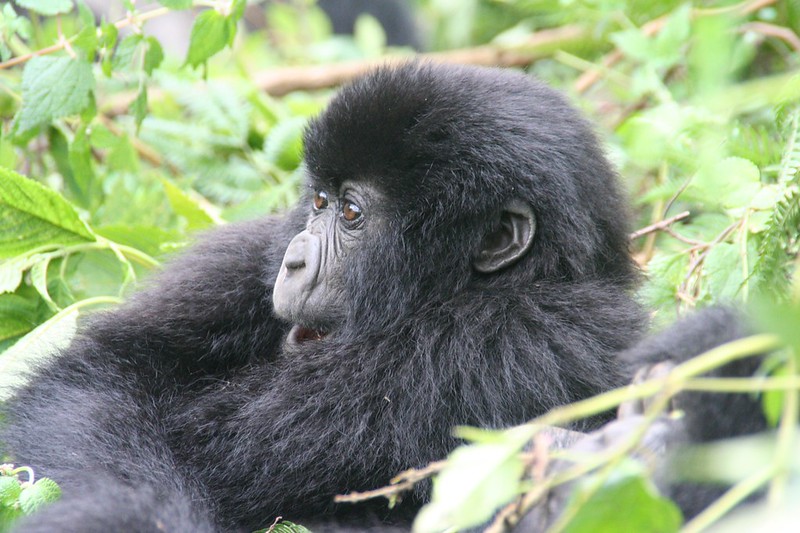 The kindness and the professionalism of the guides will help you cope with the steep slopes, the stinging nettles as well as the nerves that make every gasping and muddy step a bit easier. During the sunny season, the gorillas are only a short while from the park boundary and here people tend to think what the worry is about. Its important to book your gorilla permits in advance. The best gorilla treks in Rwanda are offered by Wild Whispers Africa Ltd.

3 of the 4 sub species of mountain gorillas are also found in DR Congo. Gorilla tours with the habituated groups started in the 1970s.

Within Kahuzi Biega National park, it’s a stronghold of the eastern lowland gorillas, and the park will give you one of the best gorilla viewing adventure. Bakavu is also the nearest town and has got some good beautiful hotels, however, you need to check the security conditions in case you are to enter DRC from Rwanda.

The cross River gorillas are also found in the cross River state, and here the government has invested heavily with in the tourism infrastructure like the fantastic cable car up the Obudu cattle Ranch Hotel.

Though the chances of viewing these mountain gorillas are so low and their total population consists of over 200 individuals and these are spread over an area of over 12,000km and these include; Afi mountain, the Okwangwo division and Mbe Mountain of the cross river National park.

For this reason, the scientists are so vigilant about habituating them.  Visiting their habitat will help to conserve it as well as the two remaining primate sanctuaries and the restoration projects, the pandrillus for the  tool monkeys and the chimpanzees as well as the cercopan for the many monkey species that are based in Calabar.

Western Lowland Gorillas (gorilla gorilla) are found in Monte Alen National Park in Central Rio Muni. With the number just over 316, ooo gorillas, they are considered to be critically endangered.

Monte Alen National park is a beautiful forested park and its rough terrain helps in protecting it from the commercial classification.

As per our knowledge, there are no wild Lowland gorillas. The tourism organization is so low and in the early stages of development and the locals that are trained have just started conducting guided day treks. For now its possible to see gorillas in this park.

Gabon as a country has made a courageous bid in order to expand its economy by generating 13 national parks in 2002 and most of these have got gorilla habitats.

These WLG habituation programme at the Mikongo conservation centre in the Lope National park that was ended in 2010. Even though the visitors are not taken on the gorilla spotting treks, the guests can view them as they are looking at the wildlife.

Loango National park also offers the erratic combination of Atlantic beach as well as the rainforest, where the hippos can be seen surfing, the whales as well as dolphins shallow off shores and the forests are the homes to the gorillas, chimpanzees as well as the forest elephants.

The Moukalaba Doudon National Park has also got a high density of gorillas as well as an eco- tourism project that started with the help from the Gorilla Organization.

The wild lowland gorillas can only be found in the Cabinda enclave which is part of Angola north of the mouth of river Congo.

In 2021 January, Angola joined the Gorilla Agreement a great step to agree on the convervation of the gorillas and also their habitat. They are working closely with the Great Apes Survival Partnership (GRASP)

Due to the loss of the habituated lossi gorillas to Ebola in 2002, the Odzala National park that is nearby shows and of the best options for viewing the wild lowland gorillas.

This park is also currently home to the two habituated family groups that can also be viewed by the guests. These can also be seen from the hides as they visit the bias or the open clearing of the forest.

The most known bai is the Mbeli Bai in the Nouabale Ndoki national park, where you can view over 100 gorillas that have been monitored by Wildlife Conservation society for many years;the gorilla groups can be viewed paddling into the marsh to forage for the water plants near the forest elephants, antelope like the sitatung as well as the buffalos.

The Wild Lowland gorillas are also being reformed back into the forest in the Lefini reserve where the guests can view the silverback on the forested island from the boat.

This is one of the best places to track the mountain gorillas which are the wild lowland gorillas and is Bai Hokou with in Dzanga Ndoki National park.

The WWF project has also succeeded in habituating of the group. You can also expect to have a calm contact though the dense forest and the low light under the canopy that make photographing more challenging.

About 11 gorilla families are found in Cameroon’s rain forests and lowland montane forests. The Afi Mountain Wildlife Sanctuary was established early 2000 to conserve the endangered apes. About 300 gorillas are believed to be in the wild.

Prominent Destinations in Africa Without Gorillas

Types of Gorillas In Africa

Parks Where Gorillas Are Found in Africa.