Guide to Zimbabwe safaris, attractions, things to do, where to stay and trusted tour operators.

Zimbabwe is found South of Africa; it is encircled by Botswana in the West and Southwest, South Africa in the South, Zambia in the Northwest and Mozambique in the East and Northeast. Zimbabwe is a landlocked country situated between River Limpopo and River Zambezi. The commonly used languages are Shona, English and Ndebele and its largest capital city is Harare. Zimbabwe’s climate varies according to altitude. There are two seasons; the wet season begins from November to March where by the rains are heavy and the dry season includes a short cool season that starts from May to September and during this time there are less rains received.

Zimbabwe is part of the countries with the biggest attractions in Africa. Starting with the magnificent water bodies to the amazing national parks, Zimbabwe is filled with specially-made adventures for all types of travelers. The list for what to do in Zimbabwe is endless such as canoeing safaris, golf, game drives, hiking, bungee jumping, wedding/honey moon safaris trekking, freshwater fishing and many more. The attractions to find in Zimbabwe include the following;

Victoria Falls is the most famous holiday option in Zimbabwe; it is located south of Africa forming a natural border of Zambia and Zimbabwe. The falls are identified by the locals as “Mosi-oa-Tunya” which literally is translated as “the smoke that thunders”. The Victoria Falls are on River Zambezi, it is said that they are the biggest falls around the globe and are as high as 108m and as wide as 1,708m. Given that the falls are shared into two countries the lower falls are found in Zimbabwe and the upper ones in Zambia, all of which have magnificent and unique views that give an unforgettable experience. It is believed that Victoria Falls were discovered in 1885 by David Livingstone a missionary explorer. 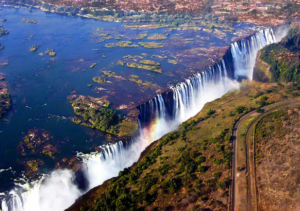 One can visit the Victoria Falls in the months of July to September, November and between the months of January to May. It is a wet time of year with an intense downpour of rainfall thus the River Zambezi fills up which makes it difficult for one to see the magnificent falls given that the mist that is created by the water force is like a barrier and it makes it difficult to see all the way through. A natural pool known as the ‘Devil’s pool’; is just around the falls. It looks frightening but it’s something one cannot miss out on. During the months September through December the water level reduces making it easier for tourists to swim and also take pictures at the edge of the falls. This is one of the most amazing and unforgettable experiences one can get while here.

The daring visitors can go for bungee jumping off the falls bridge, this is an amazing experience as you dive your head off the 111m high Victoria falls bridge, it’s quite an adventurous and wonderful time. Other activities that one can do include; bungee jumping, flight tours over the falls, water rafting, sun set cruises, zip lining, bridge tours among others.

Lake Kariba is situated in the southern province alongside the Zambia and Zimbabwe borders; it is the biggest manmade lake by volume in the world. This lake was primarily formed to supply hydro-electric power to the 2 countries (Zimbabwe and Zambia) hence building of the Kariba dam which began in 1955 and was completed in 1977. During the building of the dam, very many animals, birds and natives were shifted because there was a threat mainly caused by the rising amount of water. The lake is approximately 40 km in width and 223 km stretched covering an area of close to 2,150 square miles.

Lake Kariba is one of the finest places to relax, chill and enjoy a weekend on a house boat away from home. It is gifted with immense opportunities like fishing, boating, sun bathing, water sports and watching dazzling sunsets among others. While here there is chance of visiting the Matusadona National Park whereby you will be able to get closer to the wildlife.

Enjoy great stunning views from the islands on the lake such as Snake Island, Mazze Island, Bed Island and Sekula Island among others. Try not to miss out on visiting the Dam site where by you will learn a lot about the customs and beliefs of the locals, guides will also share a lot with you about the Nyaminyami snake God, whom the natives believe protects them and that he lived in the waters years ago. While in this area, guests can stay at any up-market lodge on the banks, campsites and mid-range cottages.

Hwange is Zimbabwe’s largest National Park covering about 14,650 sq km. It was formerly named as Wankie Game Reserve before it was made a National Park; it is situated in the Northwestern part of Zimbabwe between Victoria Falls and Bulawayo. The park is home to abundant wildlife such as the large herds of elephants (over 40,000), giraffes, rhinos, leopards, and lions, wildebeests approximately over 100 species of mammals and around 400 bird species. Get pleasure from activities like birding, game drives, walking safaris, cultural visits to surrounding areas, trekking the painted dog, camping under the stars and others.

Mana pools national park is an area with phenomenal wildlife and exceptional natural beauty. The park is a recognized UNESCO World Heritage Site located along the banks of the Zambezi River in the Western province. It is home to abundant wildlife such as over 12,000 elephants, over 16,000 buffaloes, zebras, impalas, hyenas, kudus, wild dogs, leopards and lions among others. In most cases the best time to view wildlife is during the hot, dry season whereby most animals come nearer the river banks and the pools to drink water. Over 350 bird species are found in the park including the Spurwing and Egyptian geese, storks, Goliath herons, cormorants, kingfishers, coloured bee-eaters, Nyasa lovebird, and Livingstone’s flycatcher and many others.

Enjoy activities like unguided and guided walks in the wilderness, canoeing along the river, birding, river fishing, and lion tracking among others. Lodging facilities are available as the park has over five luxury lodges, exclusive and communal campsites.

These are a historical site which is one you cannot miss out, situated between Limpopo and Zambezi Rivers in Masvigo in the south of Zimbabwe. This historical site is the largest set of ruins in south of Sahara, Africa, they more like stone buildings and were constructed in the 11th century. These ruins were recognized as a UNESCO World Heritage Site in 1986, they were once the country’s monarchy.

Visitors have a great time while here whereby they get opportunities to explore the Great Ruins and listen stories about those that stayed there. Tourists are informed to carry enough drinking water as they visit this place since in most cases the climate is hot and humid. Concerning the stay in this place, it is advisable to stay the nearby cabins.

The Chimanimani area is endowed the Chimanimani Mountains which are a border between Zimbabwe (in the East) and Mozambique. These mountains are an amazing and great place for hikers whereby they get chance to have nice spectacular views as they climb to the top of the mountain. There is so much to see in this area such as the Bridal Veil Falls, different rare tree species like the cycads and wild orchids found in the Chirinda forest. Also don’t miss out on seeing the red mahogany that is over one thousand years old.

Harare is Zimbabwe’s capital city, it was formerly known as Salisbury and famously nicknamed as the sunshine city, and it is a very clean city, for visitors who visit the country for the first time it is advised you tour this city to have an added experience. Harare is endowed with African art and traditional designs like jewelry, textiles, musical instruments and baskets, beautiful flowering trees, amazing parks, interesting local culture, the lion and cheetah parks, and interesting night life that is enjoyed in hotels, casinos and bars. There are available and affordable accommodation facilities in Harare.

Mutarazi Falls:
Mutarazi Falls are located in the Eastern highlands in Nyanga National Park in Zimbabwe. These falls are highest water fall in Zimbabwe falling at 762m, the second highest in Africa and ranking the 17th in the world. It is an amazing time hearing and watching the water waters fall, smelling a fresh natural odor and meandering through the rocks. Visiting these falls is an added experience whereby you are able to visit this Zimbabwe safari park at large which is not only gifted with the amazing waterfalls but also vegetation and wildlife such as lions, reedbucks, buffaloes, antelopes, hyenas, kudus and leopards. The temperatures around the falls are cooler than other parts of the country even during summer since the falls are on a higher altitude and during the winter seasons it is cooler with temperatures ranging from 12ºC and 24ºC, at night its even more as temperatures fall below freezing.

Take part in adventure activities such as kayaking, wild water rafting, hiking around the fall, nature walks among others.

These caves are a very nice place, a collection of dolomite and limestone caves; managed by the Zimbabwe parks and Wildlife Management Authority. Chinhoyi caves are located in Makonde district in Zimbabwe near Chivero Ntaional Park. The centre of attraction here is the natural blue pool that has a depth of about 130m this makes it an exciting and famous place for divers especially scuba divers. It is also a great place to hear stories about its historical background from the guides. Also as most elders believe there is a mystical appeal behind these caves.

Matobo National Park is located in Bulawayo and is a recognized UNESCO World Heritage Site. It is a dwelling place for the Matobo hills or Matopos which were formed over two million years ago. This park is home to a variety of wild life such as white and black rhinos, giraffes, antelopes, leopards, and hyenas, there are also over 175 bird species including the black eagle. This place has great spectacular views, and apart from viewing the Matopos; visitors can do bird watching, and horseback safaris whereby you are able to view most wildlife in the park. Also you can have an overnight in the park by camping; this is also an experience of its own whereby you will be surrounded by the African beautiful landscape and all in it!

Elephant’s Walk Shopping & Artist Village is place for those interested in African arts and crafts. While here you are in line of meeting different local craftsmen and artists who make the amazing jewelry and other Zimbabwean pieces, also visit the Jewelry studio where man craftsmen are. You can have a time with them and ask them questions about how they make such, also buy for yourself crafts and for someone back at home. The Elephant Walk Shopping Village is an exceptional shopping destination which presents a lot of stores and boutique galleries; the major aim is to promote local artists and give visitors a reliable and an authentic destination. Also endeavor to enjoy some tasty eats and locally brewed Zimbabwean coffee at various Coffee Shops like The Africa Café. Also those interested in History and African culture are not left out whereby the Jafuta Heritage Centre is at your service.

The Antelope Park is a must visit while on safari in Zimbabwe, it is a great time in this park where a number of activities are available such as elephant safaris such as riding on them, walk with the lions and feeding them, horse riding, bush walks, bird watching, boat cruises, sport fishing, game viewing among others. There are enough comfortable accommodation options which include; from Campsites, Group lodges and Private lodges