All About Mountain Gorillas of Africa

Fact you need to learn about Africa’s Mountain Gorillas

Live in families or Gorilla Groups

Mountain gorillas live in different families with each gorilla belonging to a certain family is highly attached to that family. It is very interesting that even if the two or three families meet and mix, every gorilla goes back to her/his own family at the time of departure. A dominant silver back leads a family and the entire family consists of about 10-30 members. All year round, only 8 People are allowed to visit a single gorilla family. 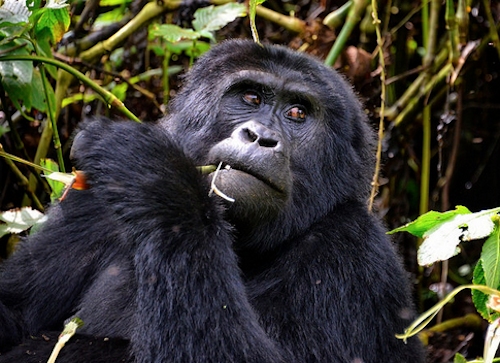 Mountain gorilla look aggressive with males having crowned muscles and the silvery hair on their backs at their age of sexual maturity. They have long arm than legs, large head s with no hair, shiny black muzzle, thick trunk and broad chest.

Just like their name, mountain gorillas live in hilly regions. The rare species hike up to the mountain peaks, which are mostly forested. The thick fur enables them to survive the coldness in the higher altitudes.Gorilla trekking in Africa therefore entails hiking the dense forest the experience that every traveler lives to remember.

Mountain gorillas are so close to human beings sharing 98% of human genes which them so vulnerable to human diseases. The mostly spread are airborne like flue and cough easily spread from people to mountain gorilla. Because of this, travelers are advised to keep a distance of seven meters away from the gorillas and others like in virungas, travelers are given masks to put on their mouth and nose while coughing and sneezing.

Mountain gorillas are movable in that they cannot stay in one place for two nights. Every morning, each family led by a dominant silver back leaves the site they slept and move to new places. They make new nests in the evening where they sleep that vey night and will not return there the next night, this is reason why the ranges have to observe where the gorillas have slept so that they can be followed by the trekkers he next morning.

In conclusion therefore, mountain gorillas are very interesting animals to interact with. Each member in the family plays a different role, which resemble a real human family.