Most tourists who visit Bwindi Forest National Park usually combine their gorilla trekking safari with visits to Lake Mburo National Park. Its the reason why we are featuring it here.

The tourists can visit the national park throughout the whole year and the conditions in the park are more difficult especially during the rainy season. There are also available accommodation facilities including; Mihingo lodge/ Mantana tented camp/ the Rwakobo Rock, Arcadia cottages, the Mburo safari lodge, Mpogo lodge/ Rwonyo cam and the Eagle’s nest and many more lodge options that are nearby in Mbarara as well as Lyantonde. The park is also located on the Mbarara- Kampala high way and it’s a great stop over as it connects the attractions of the western part of Uganda.

The main activities in Lake Mburo National Park include; the game drives with in the rolling hills as well as the open grasslands, the boat cruise along the lake, the forest walks in Rubanga that offers an opportunity of viewing many different bird species, nature walks, sport fishing, horseback riding and quad biking. You can get advice from your local Uganda safari operator on how you can easily access the park and also how to book an activity for the safari. 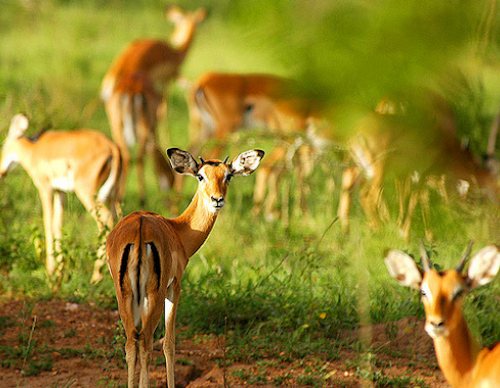 This lake is also home to over 350 bird species like the red faced barbet that can only be found in this national park. There is also the endemic African finfoot as well as the rare shoebill, the papyrus yellow warbler, brown chested lapwing, carrother’s cisticola, Tabora cisticola, saddle billed stork, the Africa scops, and Abyssinian ground hornbill as well as the white winged warbler. The park is a birders paradise in and a visitor’s delight with variety of colorful bird species.

The wildlife species are about 69 that are found in this park including the Impalas, Elands, antelopes, zebras, giraffes, Rothschild, Burchell zebras and many more. You can also view the Buffalos, warthogs, reedbucks, leopards, lions, hyenas, hippos and crocodiles. The park gives a good taste of the wild of Africa so close to Kampala and it’s just three and half hour drive that make it accessible for those that have limited time so want to view some wildlife before leaving the country.

Within Uganda, you can adventure the real African Wild from horseback on safari in Lake Mburo National park. This activity will take 2 to 5 hours across the African savannah stressed at Lake Mburo Park with the rolling hills, valleys as well as the various lakes in and around Lake Mburo Park. The horse ride safari will give you a good feeling of the African wild on the horseback.

Lake Mburo National park is a safe and more stable adventure with well-trained guides as you enjoy your time with in the rolling savannah of Lake Mburo National park.  You will experience many animal sightings including; the giraffes, the topis, elands, duikers, bushbucks, the waterbucks, zebras, and many more. You will enjoy the scenic beauty, the birds as well as the vegetation. The time on the horseback safari will be one of the highlights of your real time in Uganda.

Mihingo safari lodge also runs these horseback safaris and has got 7 horses and 4 ponies and only 6 participants can participate in the safari. This is done to avoid the crowds. The horse ride safari is an experience not to be missed and also mihingo lodge is also one of the lodge that shouldn’t be missed in Uganda. This is one of the luxury tented camps in Uganda and has set standards for the tented camps in Uganda. The horse riding safaris can also be done at Lake Albert lodge in Kabwoya wildlife reserve

The community tourism enterprises that are around Lake Mburo National park have put up a collective support as well as a survival strategy so that to improve community benefits from tourism around the protected Areas. These enterprises have also formed an association and then developed this association constitution to guide this advancement. Even though the number of visitors coming to the community enterprise is still low, the community has remained so optimistic due to the growing demand trend that is towards the community experience worldwide. This community is also waiting for the product testing safaris in order to improve the standards of services offered.