People have been making pilgrimage to Namugongo for the Uganda Martyrs day which is celebrated every year on 3rd June, trekking long distances from the different districts and some from other countries.

3rd June will forever be etched into people’s memories due to the numerous encounters of how courageous boys and men twenty six in number were tortured by the then Buganda king Mwanga and later burnt at Namugongo for failure to denounce their new found religion that is Christianity which the Kabaka did not agree to.

The journey of these faithful started with the arrival of the Christian missionaries who were warmly welcomed by the Kabaka of Buganda Muteesa 1. They started preaching to the people in the court and later started catechism classes for both the Anglican and Catholics. The students were baptized and everything was moving on smoothly until the death of Muteesa who was succeeded by his son Mwanga 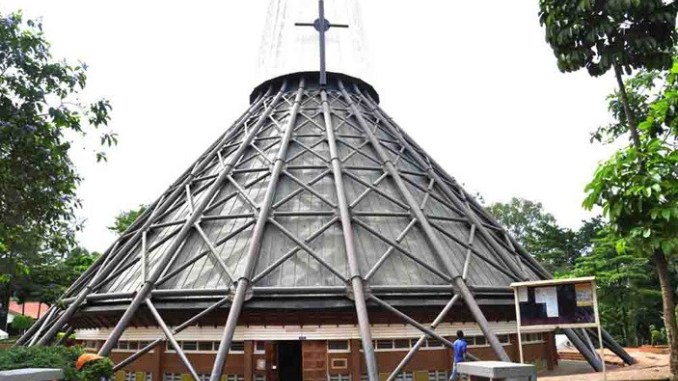 Christianity would not have been a problem but it meant that all the converts had to denounce all the traditional normally and this felt like they were disobeying the Kabaka and all his rules. All this happened in 1884.

Kabaka Mwanga thought the Christian’s had gotten rebellious ideas which led to the execution of the first three martyrs that is Nuwa Serwanga, Yusuf Rugarama and Makko Kakumba just a year after his ascent to the throne on 31st January 1885. The three were murdered in Busega.

The Kabaka being a superstitious man also ordered for the killing of the Anglican Bishop Hannington James who was on his way to Buganda through Eastern Uganda. He was murdered in 1885 October because the kabaka’s wise men told him that the enemy who would destroy him will come from the East and that’s how he was killed.

The major killing took place in 1886 where many of the converts where many of them were forced to denounce their faith which they refused to do and they were sentenced to death. They were then rounded up at Munyonyo and made to walk up to Namugongo where they were meant to be executed from. They were made to fetch their own firewood and then set ablaze by Mukajanga who was working under the orders of Kabaka Mwanga.

Kabaka Mwanga wanted the faith to diminish after killing the Martyrs but he was in for a surprise when after their deaths, the faith kept on growing stronger as the bloodshed by the martyrs was the beginning of something great in the country and the whole world. Although it is believed there are other people who were killed and they were not recorded.

Pope Benedict XV blessed the twenty two catholic boys and men in 1920 which is known to be a good and major step in the Catholic Church and in 1964 Pope Paul VI canonized them as saints while in the Vatican II conference and up to date, they became the first Africans to be canonized as saints.

The Pope Paul VI visited the pearl of Africa Uganda to honor the saints and he made a pilgrimage to Namugongo and dedicated the place where the Charles Lwanga were burnt from for a shrine and the first Mass to be celebrated in this shrine was in 1975 and it was also dedicated and named a basilica. And Pope Paul VI became the first pope to visit the sub Saharan African country while still reign and pope john Paul II also visited the shrine in 1993.

Some of the Uganda martyrs include the following:

After a brief background about how they became martyrs, we are going to look at a brief journey of how some of these men became martyrs.

He was the senior advisor to Kabaka Mwanga and he was a catholic convert. He was the first martyr to be killed after condemning the King for the murder of Bishop Hannington who was not given the chance to defend himself as was the custom with the Baganda. The Kabaka was annoyed by being belittled by a mere servant and he ordered for his arrest and in November 1885 he was beheaded at Nakivubo hence becoming the first catholic martyr.

He was the last person to be murdered as recorded by the archives. He was beheaded on January 27th 1887 in Mengo.

Charles Lwanga also known as Kaloli Lwanga by the locals came into the court service after King Mwanga took over the throne. He was dearly known for his strength when it came to wrestling and he was also put in charge to excavate the Kabaka Lake with Joseph Mukasa as his immediate supervisor. The Kabaka ordered for his arrest because he had rebuked him for killing their then leader of Christians Joseph Mukasa Balikuddembe and the grudge that was being held between him and ssenkoole.

When he was sentenced to death, ssenkoole singled him out and he was suffered a slow death as fire was set from his feet till it consumed his whole body in Namugongo in 1886.

He was born in ssingo and he belonged to the Lugave clan. After the killing of Joseph Mukasa, kibuuka with other Christians stole away into the night and went to the missionaries to be baptized because they knew they were going to come for them too and wanted to die in Christ.

He went with Kiwanuka and they were baptized in 1885 by Father Loudrel and he even bade farewell to his family. In May the next year, he was found guilty and taken to Namugongo where he was burnt alive in a strong furnace.

He was the son of pokiino a chief in Buganda and he grew up in quite a reckless way. When he changed and started acting in a gentler way and controlling his temper, he was baptized and became a fully fledged Christian. As time went on the Kabaka gave him two wives as a sign of appreciation for the good services that he offered in the court. But when his fellow Christian’s heard about this they told him it was a sin and he secluded himself from society as penance for his sins and this is where the execution team found him whilst he was praying.

Bruno was beaten up badly by his ex brother in law Lutaaya and he was later handed over to Mukajanga who tied him with ropes and submerged him in a pool of mud which increased the tightening of the ropes. He later walked from Mengo to Munyonyo for two hours with fellow Christian’s and was burnt on 3rd June 1886 after long suffering at the hands of his tormentors.

He came from Bunyoro after the Baganda raided and brought them as servants in the palace. He became a Christian and was close to Andrew kagwa. Due to his stubborn nature, he would not mind culture a lot and would help out the women when it came to peeling.

Kiwanuka was a clerk in the court of Kabaka Mwanga and he became a Christian under the white Fathers. He died as a result of being burnt at Namugongo on 3rd June 1886.

He was a Munyoro by tribe and he was very good at playing drums in the court. He joined the Christian faith in 1880 and attended catechism almost immediately. He was baptized in 1882 and he also taught, baptized and buried those that died in the faith. By the time he died, he had been named a Mugowa and he was sentenced to death with other Christians at Munyonyo.

He was killed while holding a small book for catechism in his hand. They first cut off his hand, beheaded him and cut the rest of his body into small parts and the locals buried his body at the exact spot where the execution took place.

He was the youngest martyr who died at the age of 16 years only. He is remembered for his bravery when it came to his faith and he would tell others to wake him up just so that he would not miss prayers. He was sentenced to death by Kabaka Mwanga in Namugongo and was burnt to death on #rd June by mukajanga.

Anatanansio Bazzekuketta was a servant in the court of Kabaka Mwanga and he converted to Christianity when the white Fathers came into Buganda. he was executed at Nakivubo where he was hacked into pieces on 27th May 1886.