With slightly over 1006 mountain gorillas remaining in the world according to the Uganda Wildlife Authority (2018) is home two more than half of the world’s total gorilla population with the majority of these living within the different sectors of the Bwindi impenetrable Forest National Park a renowned world heritage site as well as the Mgahinga National Park found in the far southwestern corner of Uganda. Mountain Gorillas can only be seen in three countries in the whole world so the remaining world population of gorillas is found within Rwanda and the neighboring Democratic republic of Congo. There are a total of 14 habituated gorilla families found in Uganda each lead by a dominant silverback with 12 groups available for gorilla trekking while the 2 are for gorilla habituation experience.

For each gorilla family, a maximum of eight (8) gorilla permits is offered for gorilla trekking an experienced during which tourists get a chance to visit these amazing hairy forest Giants in their natural habitat. Because mountain gorillas do not stay in the same place for more than one night and move to new places each day, during the gorilla trekking safari experience you will have to walk through the forests for 2 to 44 hours searching for them. 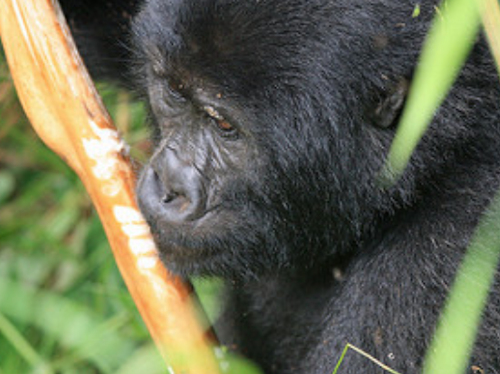 Below are the different habituated mountain gorilla families found in Uganda; these have been grouped into four (4) different categories depending on the areas (in Bwindi National Park) where they are found.

Rushaga region of Bwindi Forest is habitat of the Nshongi Group, Kahungye, Bweza, Busingye as well as the Mishaya Gorilla Family

This group was first sighted close to River Nshongi after which it was named. In 2009 in the month of September it was opened for tourism with a total of thirty six (36) individuals which made it the biggest habituated gorillas group in Uganda. This large gorilla family had three (3) silverbacks and a total of seven (7) blackbacks that lived in harmony without making any attempts to leadership. In the month of July 2010 this group split into two with a group of 10 members led by silverback Mishaya leaving. The remaining group comprised of just 26 individuals and remained with four (4) silverbacks

In July 2010 this group separated from the huge Nshongi group led by silverback Mishaya. Due to his fighting character he encountered several other gorilla families and over the years managed to increase in number. Sadly in 2011 in the month of April he encountered a wild gorilla family that wasn’t habituated and got several injuries together with one of the infants in his group who was just two year old. Fortunately these were treated and recovered well by the Mountain Gorilla Veterinary Project veterinaries.

This is among the most recently habituated family of gorillas found within the Bwindi impenetrable Forest National Park and comprises of twenty seven (27) individuals among which were three silverbacks. In the month of October, 2011 it was opened for tourism and about one year later this gorilla family split to form the Busingye gorilla family. Today dominant silverback Gwigi whose name means ‘door’ leads this active group.

In 2009 in the month of September the largest group to ever be habituated in Bwindi National Park – the Nshongi  was opened for tourism however silverback Mishaya slip from the family to form his own group the Mishaya gorilla family in July 2010. But just two years down the road after its formation, silverback Bweza decided to leave the group forming Bweza family and in December 2012 the gorilla family was opened to tourism.

Group size: nine (9) with one silverback

Buhoma Area of Bwindi Impenetrable Forest is home to the Mubare Gorilla family, Habinyanja Gorilla Family as well as the Rushegura gorilla family

In 1993 the Mubare gorilla family was opened for tourism activities which makes it the oldest habituated mountain gorilla family in the whole of Uganda. This family was first seen on Mubare Hill found in the depth of the Bwindi impenetrable forest and it was after this that it was named.  According to the trackers who first spotted this group comprised of eighteen 18 individuals with Ruhondeza as the dominant male silverback. As time went by many of the members of this gorilla family left – some joining other groups, others dying in the course of the violent fights that happened at the time, and unfortunately the gorilla family suffered the death of one of their baby gorillas and by 2012 there were only 5 members in this group. The leadership of silverback Ruhondeza was challenged in the month of March 2012 when a wild gorilla group attacked his family and left with a couple of females. The defeated Ruhondeza had at the time grown old and weaker and fled to the neighboring community Forest where he took refuge. Nonetheless the wildlife researchers of Bwindi national park continued to monitor his progress until on the 27th June 2020 he sadly died in his sleep. This dignified silverback who was said to be more than 50 years old was buried close to the park headquarter offices and his gravestone can be seen today. This silverback was well known as a gentle mannered yet lazy leader a character well depicted by his name which means ‘sleepy fellow’.

First opened for tourism in 1999, Habinyanja gorilla family habituation process began in 1997. this group was first sighted close to a swamp within the impenetrable forest of Bwindi National Park and it’s from this that it’s name Habinyanja which was derived from ‘nyanja’ a local word in the Rukiga language that means ‘a place with water’. Mugurisi a word that means ‘old man’ was the name for the dominant silverback that was leading this group at the time when it was discovered. Unfortunately he died due to old age and his two brothers Mwirima and Rwansigazi took on the leadership of this gorilla family. Because of the differences in their nature, this joint leadership did not last long as Rwansigazi loved moving a lot due to his adventurous nature while his brother Mwirima preferred covering a small range. This indifference among others led to the two brothers parting ways in a surprisingly very peaceful way that did not involve any fights. The group that remained with Mwirima was called Rushegura family while the one that left with Rwansigazi retained the name Habinyanja. Today the Habinyanja gorilla family is laid by silverback Makara who took over leadership from Rwansigazi. From time to time these groups have been seen to come across each other and they peacefully exist. in 2011 in the month of June the very social and friendly blackback Mizano was discovered dead with  several spear wounds around his neck and shoulders and it said that some porches who were with dogs attacked this group. This unfortunate incident was recorded as the first scenario ever since 1995 where a gorilla was killed by poachers.

This group separated from the bigger Habinyanja family and the separation happened in 2002 at a place called Rushegura after which it was named. At the time of separation the dominant silverback Mwirima left with twelve (12) individuals among which were five (5) females. By 2010 the family had increased in number to a total of nineteen (19) individuals. Over the years, silverback Mwirima had been devoted to protecting his family and fought several attacks by wild gorilla groups. Previously this family would cross into the democracy republic of Congo which shares boarder with the Bwindi NP, board however it eventually settled and made permanent residence in the Bwindi National Park. Fortunately this group is very calm and has harmoniously lived with the people of the nearby village and on several times it has been observed visiting the gardens of gorilla Forest camp.

In the local Rukiga language the name Nkuringo means a ‘round hill’ and it is on a round hill that this group was first see. This family had a tendency of moving to the lower slopes into the Village communities nearby where it turned out to be problematic to the people as it would eat farm produce such as sweet potatoes, bananas and other crops. Because of the numerous complaints from the local people, this group was eventually habituated for tourism in order to protect it as well as enable the local people gain from revenue acquired from gorilla tourism. At the time of habituation this group was led by silverback Nkuringo who at the time was old and weary. After his passing in 2008 in the month of April two silverbacks rafiki and safari remained in the family however leadership shifted to his son Safari. An adult female Kwitonda not long after that gave birth to twins muhozi and katungi however the latter died after succumbing to an illness at the age of one-and-a-half years

The accommodation facilities found at Nkuringo – offer a breathtaking worth the cost of the gorilla-permits- this is among of the most challenging hikes in Uganda – although undoubtedly worthwhile- as it is the most pleasing.  The Group comprises of 19 members and is a favorite to people who have tracked over one group.

This gorilla group was first seen close to River Bitukura after which it was named within the Ruhija sector of Bwindi forest National Park. It was opened for tourism is the month of October 2008 after a habituation process starting in July 2007. unique about this gorilla family is that unlike other group whose habituation processed takes two (2) years, it only took 15 months to get it fully habituated and fit for tourism. This uniqueness is believed to have been caused by the close Bond between the Bitukura family and the kyaguriro family which led to the former encountering rangers from of the Uganda wildlife authority frequently a thing that eased the habituation process. Previously it comprised of 24 members but as the years went by they reduced to just 14 members with a number of them joining other families.

Led by silverback Tibirikwata this gorilla family was opened to tourism in 2011 and over the years it has increased in number thanks to the various births within the family. In June 2011 Ntamurungi a female adult gave birth and later that very year in the month of October Musi another adult female gave birth as well. In 2012 in the month of March Kakoba another adult female give birth to twins a thing that brought tremendous joy to the gorilla family

This is the only habituated family found within Mgahinga National Park and it is led by dominant silverback Mark. The ruling silverback enjoys moving a lot and frequently the family would cross borders between Uganda, D. R Congo and Rwanda. However from November 2012 this group has remained within the Ugandan border and in the month of May 2013 it received a newborn baby who increased a family’s number. Because of the great mobility that this group exhibited in the past, the governing authority – Uganda WILDLIFE Authority decided that gorilla trekking permit to visit this family should be issued only at the UWA headquarters within the National Park.

The habituation process for this gorilla family was completed however it has not yet been opened up for tourism activity. Conservationists however, remain in close contact with it observing and studying it. Previously it was led by dominant silverback Zeus, however he was attacked by a contender gorilla Rukina who forced elderly Zeus into exile where he eventually died from.