Meeting face to face with mountain Gorillas in the jungle is one the most breathtaking and unforgettable experiences for trekkers but planning on where to go, when to go and what to pack is important before you head for you mountain Gorilla trekking destination.

Therefore the question usually asked by most tourists is; which country is better than the other? The answer is in the comparison below.

Uganda hosts about 400 mountain gorillas which is half of the world’s remaining number of these endangered species. There are 17 Gorilla groups to trek with 15 in Bwindi and 2 in Mgahinga National Park.

In Uganda, the cost of one gorilla trekking permit is far more affordable than in Rwanda at only $600 per day. With this comparison, in most cases the cost of the gorilla permit affects the decision of the visitor concerning where to trek gorillas from, whereby they end up choosing Uganda as their destination. However, reaching gorillas in Uganda is further and harder than in Rwanda.

Tourists can also enjoy Gorilla Habituation, which involves spending about 4 hours with the gorillas unlike the 1 hour experience spent while trekking gorillas. The habituation permit costs $1500 per person per day which is better than paying $1500 in Rwanda to watch gorillas for 1 hour only. Besides visiting the gorillas, there are other 9 National Parks to enjoy compared to Rwanda’s 4!  U can combine your gorilla trip with a visit to Kibale National Park which has the highest concentration of chimpanzees in Africa, or visit the Murchison Falls, trek Rwenzori and Mountain Elgon, go rafting on the Nile or visit one of the 52 tribes cultural displays and so much more.

Bwindi Forest National Park is located far from Entebbe International Airport, therefore the journey is tiresome and long especially if you are not having a stopover in any of the other National Parks. It is a 9 to 10hours drive from Entebbe or Kampala to Bwindi, if you are not interested in long drives you could take a scheduled flight to the Park. However most visitors that want to enjoy gorilla trekking in Uganda usually fly into Kigali and drive 4 hours to Bwindi which is much easier. 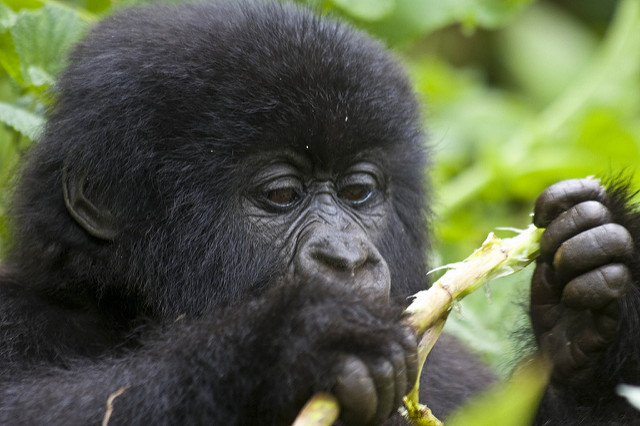 Mountain Gorillas in Rwanda live in Volcanoes National Park which is situated 113.1 km from Kigali International Airport approximately a 2hours and 30minutes drive. The park lies in the Northwestern part of the country at the border with Uganda and DR Congo.

The short distance and less time spent while traveling to the home of gorillas gives Rwanda the biggest advantage over the other two countries hence it makes Rwanda the easiest option for travelers especially those that want to spend one night and have lesser activities to do while on safari.

Volcanoes National Park is home to about 150 habituated gorillas which are divided into 10 groups and many others that are wild. And every day 96 gorilla trekking permits are issued to visitors.

It’s in Rwanda where Dian Fossey’s work of conservation and primatology was taken after she was forced to cross to the country’s border after the civil war in DR Congo and hence the oldest gorilla groups are found here.

In 2017, Rwanda increased the cost of one gorilla permit from $750 to $1500 which doubles Uganda’s cost per permit and literally triples DR Congo’s cost. Though the cost per permit is the highest, Rwanda, it is the best option if you have limited time on your African safari.

Since Rwanda is well-known for its high end tourism strategy, there are many exclusive resorts attracted which are also promising an increase in income for the local people who live around Volcanoes National Park, home to the mighty gorillas. Therefore this means that going for a gorilla safari in Volcanoes is one of the most expensive safari experiences, apart from the gorilla permit at $1500, also gorilla lodges are costly with lesser options, for example two people spending two nights at Bisate lodge can spend around $10,000 in that short period of time.The prices are higher but they come with higher standards and unforgettable experiences.

Gorilla Trekking in the DRC

Despite all the challenges related to the Goma political unrest , trekking gorillas in Virunga National Park is cheaper than it is in Uganda or Rwanda, at only $400 one can purchase a Congo gorilla trekking permit (foreigners) whereas Congolese can get it at $150. The park is Africa’s oldest Park and is endowed with the highest biodiversity.

The Park still stands as one of Africa’s most unique destinations with a number of breathtaking features like the active volcanoes; Nyiragongo which can be hiked in one day and the Nyamuragira Volcano which last erupted in 2011.

All the instabilities, fighting, difficulties in conservation aside, the committed and remarkable efforts of the team and park rangers has over the years managed to raise the number of mountain gorillas from 75 to over 300 individuals.

About 6 families are habituated in Virunga though these numbers change with new families added as even a group of gorillas can move from Rwanda. All mountain gorillas can be found on the border with Uganda and Rwanda in the south eastern region of the Park.

Also the number of tourists visiting the park has increased since 2014 when the park was reopened after a long time of being closed. Apart from trekking gorillas, Virunga National Park also hosts a habituated group of chimpanzees which you can visit to.

There are a number of factors that affect decision making when choosing where to trek mountain gorillas. The price of a gorilla permit can’t give you the full picture of what it is like. So since the comparison is between Uganda, Rwanda and the DR Congo, we should look at other factors like; the airport to fly to, the location where gorilla trekking starts from, number of habituated gorilla families, accommodation options, weather conditions, safety and other activities to do.

If all you want is the cheapest Gorilla safari, DR Congo would be the best country to visit. It is also affordable and relatively easy to get to Virunga since you fly to Kigali and drive 3 hours to cross to Goma. However, there are a number of safety challenges in DR Congo.

You can watch the habituated chimpanzees or Climb Mount Nyiragongo to wrap up your trip while in DRC, these are other activities to do after trekking.

The second most affordable option for gorilla trekking is Uganda, a gorilla permit is still at $600 per person. The accommodation options are affordable and range from luxurious lodges to budget facilities depending on which area you will trek from.

Also to access Bwindi National Park, one can fly from Entebbe to the Park by using domestic flights if they don’t want to go for the longer drive for 9 hours. Ever since Rwanda increased the cost of gorilla permits, Uganda is so popular during the high season. Therefore you are required to make your booking earlier to avoid inconveniences.

Other sightseeing activities to be enjoyed around Bwindi National Park after gorilla trek include; game drives in Queen Elizabeth National Park (Most visited park) and watching its climbing lions, Pygmy visits involving traditional dances and visiting the local medicine man and also visiting Lake Bunyonyi especially if you are from Mgahinga.

Are you a luxury traveler and interested in more exclusive and intimate experiences? Rwanda answers you well. The lodges around Volcanoes National park are luxurious, located in spectacular areas and have famous names in the luxury travel.

The Budget Traveler
Uganda’ gorilla permit is sold at $ 600 and more to that, Uganda has a total of 10 National Parks compared to Rwanda’s 4. So there is much to see and do in Uganda.

Despite the fact that Rwanda’s gorilla permit is the most expensive than Uganda and DR Congo (sold at $1,500 per permit), Rwanda still stands out as the most well organized and safest place to trek gorillas.

You can have an added experience after the trek to engage in other activities such visiting Dian Fossey’s grave, visit the local communities, climb volcanoes in the region, visit Lake Kivu, visit Dian Fossey Gorilla Museum and also watch golden monkeys.

Companies To Organize You Gorilla Trek

Some companies offer tours to just a single destination. We therefore suggest that you take on one of the following.

One thought on “Gorilla Trekking Rwanda Vs Uganda Vs Congo, Comparing Best Gorilla Safaris in Africa”